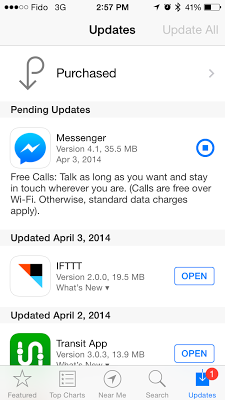 Today, an app that means a lot to a very small minority and almost nothing to the general population got an update. That app, built by Facebook, is a really great example of what can happen when a company tries to disrupt  the market with a new feature that will change the way we communicate.
Though Facebook Messenger is actually a little behind the times (its offerings are far behind the Google Hangouts platform), the fact that Facebook seems to hold a much larger customer base is good news for the latest feature Facebook is trying to show off, free phone calls to any Facebook user!
Now, if you’re like me, you’re probably saying “hold on, couldn’t you already make phone calls with Facebook Messenger?”. And you would be right. The ability to make calls in Facebook Messenger has existed for at least a couple of years, but it is a very underused feature that almost nobody knows about. The fact that it also doesn’t require you to be friends with somebody on Facebook, and doesn’t require that you know their phone number (though one of the two is required) means that it (and apps like it (FaceTime, Hangouts, Skype, etc.) SHOULD be the main way we’re all communicating now.

All Facebook did in this update was make the “call” button a little bit more prominent in conversations, something that will hopefully prompt a little more use of the feature.

SMS and regular carrier minutes should have gone the way of the dodo years ago. Anybody who has made a high quality VOIP (voice-over-internet protocol) call will tell you that sound quality is lightyears ahead of anything that your carrier can provide, and access is basically ubiquitous and extremely cheap.
However, because phone carriers (especially in North America) have an oligopoly (a fancy word for saying that there are only a few providers and they can basically keep prices high; this is basically a monopoly with a couple of extra players), they can keep the costs of data high and drive people to continue to use (and more importantly pay for) their phone minutes and text messages.
The update notes from the app update for Facebook Messenger basically tell you everything you need to know about this, and also tell you the problem with this system and why these kinds of apps are not the only thing we use. It says “Calls are free over Wi-Fi. Otherwise, standard data charges apply”. This statement is completely untrue, and in 2014 should have disappeared from common use long ago.
Essentially, Wi-Fi is NOT free, you pay for Wi-Fi and have caps on the data you can use, they are just MUCH MUCH higher than anything on your cell phone or tablet. Wireless data is restricted because companies don’t have to offer it in an unlimited fashion (see Oligopoly) even if the impact on the network would be minimal. The next generation of human communication is upon us, but we can’t see it because massive conglomerated corporations are holding us back, and because nobody wants to pay $100s of dollars for modern unlimited data plans to send messages and make calls when the incumbent phone and SMS services are being hugely discounted because it’s the only way telecommunications corporations can make any profit.