One of the most painful things about trying to stay on top of the latest technology is the waiting that is required for your online orders to arrive.

That being said, I have had very good experiences with Amazon and Canada Post – even the orders that are not assigned tracking numbers, they arrive on-time and without any additional investigation and effort put into locating my shipments. Now UPS on the other hand has been nothing short of useless.

It is unfortunate that Google Play uses UPS as their primary distribution service provider (for Canadian shipments, anyway – I can’t speak for the other international distribution networks). Don’t get me wrong – this is in no way Google’s fault and they really have no control over it (unless they chose a different shipping service, which would be more than welcome). Quite frankly, this isn’t even a matter of shipments being late, or additional fees/costs; UPS just makes things so unnecessarily difficult for the receiver to get the delivery in their hands once it leaves the shipper’s possession.

Exhibit A: We had the unfortunate circumstance of waiting for our new shiny Nexus 4’s to arrive from Google Canada HQ while we were experiencing the flood of the century here in Calgary. This flood caused the downtown core to be completely shut down for a good week while cleanup efforts were being made to at least allow traffic back onto the streets. We were living downtown at the time, and we had been evacuated to higher ground while our package was in transit. It was quite clear to us that this would cause delays/complications, which we were more than okay to deal with if it meant we would get our hands on our shiny new Nexus 4’s that we had been so eagerly waiting for. Unfortunately, it was not as easy as calling up UPS and letting them know of the circumstance and having the delivery address changed to that of the temporary refuge in which we were residing for the time being, hoping to save them the trouble of wading through waist-deep Bow River water to find our apartment building evacuated.

“We need to make a delivery attempt before we accept an alternate address.”

“A delayed delivery is not considered a delivery attempt, as it had not left the depot.”

“Ummmm okay that’s kind of weird – it says right here online that the package was scanned out for delivery.”


“I don’t know why it would say that, it was delayed and so doesn’t count as a delivery attempt”

This exchange was repeated and elaborated for the next five minutes, and the only answers they could give was “That’s odd, I don’t know why it would say that” and “We need to make at least one delivery attempt”.

Long story short, we ended up having to go through management for them to allow us the privilege of coming down to the depot to pick the package up ourselves. This was after three days of phone calls to UPS and trying to reason with them to understand the circumstance and how ridiculous their policies were. They went as far as saying that if we wanted the shipping address changed, we would have to go through Google to contact them to change the shipping address.


Exhibit B/C/D/… : Delivery is scheduled for such-and-such a day; online delivery status shows it is out for delivery. One of us stays home to accept the package, and after an entire day of waiting we find a delivery ship saying there was an attempted and failed delivery. I wouldn’t call it much of an attempt when there isn’t so much as a phone call to confirm a buzzer number or an effort to find our concierge desk to leave the package at. Heck, just take a look at this delivery status list from this week: 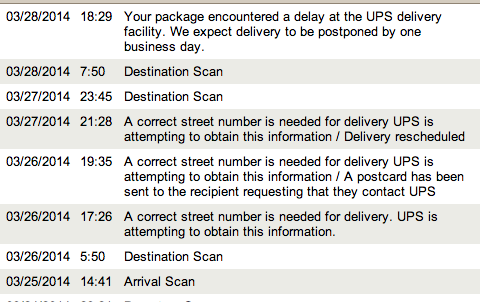 1.) The street number shown on the delivery order has been correct the entire time, so I have no idea why there are issues with the address.

2.) After calling UPS to assure them that the address is correct, the response from the UPS rep was “Well it’s here at the depot right now, it’s an option to just come and get the package yourself.”

ARE YOU SERIOUS. Your solution to causing me inconvenience is to cause me even MORE inconvenience by getting me to come to your depot to collect the package that was supposed to be delivered YESTERDAY.

3.) After confirming the address with UPS and being assured that the package would be delivered on the 28th, there was yet another delay, for reasons unknown to me and most likely everyone else (including UPS). Now I have to wait until MONDAY before finding out if I’ll ever get my new piece of tech. And no, I’m not going to reveal what it is just yet!

Anyway, I guess the point of all of this is that there’s a cost to not buying things (especially when it comes to new pieces of technology and devices that are extra-exciting to receive!) in brick-and-mortar establishments and having to rely on logistics coordinators and delivery truck drivers.